Discovery is key to maximizing the social uptake of audio, and both Clubhouse and Twitter Spaces have faced various challenges in getting users to spot the most relevant shows in real time, which has limited the capacity of each platform to generate optimal interest.

Today, Clubhouse is taking a significant step in addressing its discovery challenges by adding many more detailed and niche interests to the topics in the app.

As you can see here, Clubhouse is introducing new topic pages that highlight the top search results, rooms and users on each topic so you can easily stay up to date on popular shows and presenters.

“We add Thousands more detailed and detailed topics, Instead of searching for “baseball”, you can search for a topic like “The Dodgers” – or for your city, university, academic interests or preferred sub-genres of music. ”

Clubhouse also now lists topics in user profiles so you can better connect with users regarding their interests and get notifications when they go live (image via @whimchic). 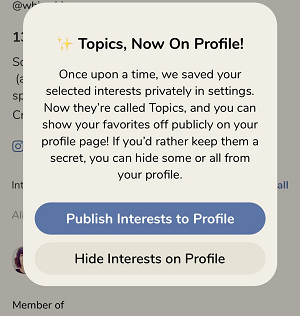 And finally, it also adds related lists to rooms, allowing creators to add topic tags during the creation process.

Again, both Clubhouse and Twitter find it a challenge to highlight the best rooms for each user in real time, with Twitter’s Spaces tab being a jumble of untargeted junk and many Clubhouse users complaining about spam mails dominating the app.

Twitter has also added topic tags to fix this, and that helps improve findability. Still, both platforms have to work harder to develop algorithmic systems that would highlight the most relevant shows for each user when they listen to a new show so that users keep coming back.

In addition to the topics, Clubhouse also offers support for other languages, with 13 new options are available today for Android and will soon be available for iOS.

Language options are important to the app’s continued growth, especially in India, which is now the largest consumer market, with 22 official languages ​​and many other dialects spoken.

The advantage of Clubhouse in India is that although many languages ​​are spoken and many citizens can speak and understand different varieties of languages, not all Indians can read and write in so many forms, which means audio connection tools can offer more options for more people to engage as text-based platforms.

With India becoming its main focus, it makes sense for Clubhouse to expand its language options to meet the increased demand in the region

In general, however, it was a bit of a surprise to see so many people disconnect from the clubhouse so quickly.

Earlier this year, the social audio app was the darling of the tech twitter sphere, with every other influencer and “thought leader” attacking themselves to praise the app – and criticize anyone who dared question its longer-term viability place.

However, since invitation exclusivity went away and other trends, like NFTs, which instilled a sense of online superiority, Clubhouse’s popularity has declined, with downloads slowing down and usage appearing to drop sharply.

In fact, in a recent anecdotal survey of Social Media Today readers on Facebook, the vast majority of responses showed that after its early hype, people stopped using the app or were not interested in trying it out.

Of course, Twitter Spaces is more accessible, and there has always been the possibility that the popularity of audio social tools would be short-lived either way, so people could get back in person at some point, reducing the need for such options .

But still, it’s surprising to see how quick the clubhouse’s rise and fall has been. There was a time when every other social app tried to jump on the social audio bandwagon, and the new trend seemed to be taking over the engagement.

Well, not so much – although there is still an opportunity for clubhouse to establish its own niche in the broader social media market, and as mentioned earlier, there is specific potential in India that is still a mainstay could do.

What to Educate Youngsters About Cash